Scientific Name: Grus americana
Taxonomy Group: Birds
COSEWIC Range: Northwest Territories, Alberta, Saskatchewan, Manitoba
COSEWIC Assessment Date and Status Change: April 2010
COSEWIC Status: Endangered
COSEWIC Status Criteria: B1ab(iii); D1
COSEWIC Reason for Designation: Canada is home to 100% of the naturally-occurring global breeding population of this species. Although never common, its population dipped to only 14 adult birds early in the last century, at which point the species was at the brink of extinction. Conservation efforts in Canada and the U.S. not only rescued the remnant population from extinction, but later resulted in population increases. To help ensure persistence of the species, efforts to establish wild flocks of captive-bred individuals outside Canada have been underway for several decades. Nevertheless, Canada’s breeding population is still very small and is confined to a limited breeding area and only one wintering location. This situation exposes it to catastrophic natural events (e.g. droughts, hurricanes) and a variety of ongoing anthropogenic threats (e.g. loss and degradation of coastal wetland habitats on the wintering grounds, oil spills in coastal areas, and collisions with power lines and structures during migration). Last, because of delayed sexual maturity and a naturally low annual reproductive output, this species has an inherently weak capacity to rebound from pressures that reduce survivorship or reproductive success.
COSEWIC History of Status Designation: Designated Endangered in April 1978. Status re-examined and confirmed in November 2000 and in April 2010.
SARA Status: Schedule 1, Endangered
Date of Listing (yyyy-mm-dd): 2003-06-05

Please note that this information is provided for general information purposes only. For the most up to date and accurate list of species listed under the Species at Risk Act, please see the Justice Laws Website. 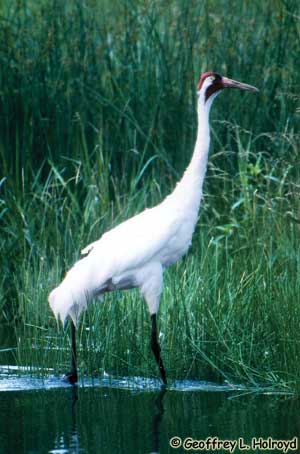 The Whooping Crane is approximately 1.5 meters tall, making it the tallest bird in North America. Adults are white with black wing tips, which are only evident when the wings are outstretched. In addition, there are red, black and grey markings on the head and face. The long legs and beak are black or greyish-black. Immature birds have a combination of greyish-white and rusty colouring and lack facial markings. Cranes fully extends their legs and neck in flight.

The current ‘natural’ nesting grounds for this species are entirely within Canada in Wood Buffalo National Park, which straddles the Alberta-Northwest Territories border. At one time the species occupied a much wider breeding range, which extended across much of the central and northern prairies of North America. It was lost from these areas following settlement around the early 1900’s. The Wood Buffalo flock migrates to the Texas Gulf Coast, where they winter in or near the Aransas National Wildlife Refuge. Additional flocks of Whooping Cranes have been established. One wild flock was established in 1975 in southeastern Idaho. It winters in the middle Rio Grande Valley of New Mexico. A non-migratory wild flock was established in 1993 in Florida. According to historical evidence, Whooping Cranes were probably never common, and their numbers probably never exceeded 1 500 individuals. As of 1998-99, the total population of wild Whooping Cranes was 260 individuals, 183 of which were members of the Wood Buffalo National Park/Aransas National Wildlife Refuge flock. This flock has increased by a little more than 35 % over the last ten years and has a population growth of 3.7% per year. Estimates for 2000 indicate that there are a total of 51 nesting pairs of cranes, with 9 pairs having successfully arrived on the wintering grounds with a single young each.

During the breeding season, Whooping Cranes inhabit marshes, bogs, and shallow lakes that are separated by narrow ridges. Trees on these upland ridges are mainly Black Spruce, White Spruce, Tamarack and various willow species with a ground cover that includes Dwarf Birch, Labrador Tea, and Bearberry. Bulrushes, Cattails, sedges, Musk-grass and other wetland and aquatic plants dominate the vegetation in the nesting areas. There has been a significant loss of suitable wetland habitat south of Wood Buffalo National Park since the early 1900’s. When migrating, Whooping Cranes stop along the way to roost and feed in a variety of wetlands and croplands. The wintering habitat consists of estuarine marshes and salt flats. Plants such as Salt Grass, Saltwort, Smooth Cordgrass, Glasswort, and Sea Ox-eye dominate the marshes, and the salt flats are dominated by Gulf Cordgrass.

The Whooping Crane migrates from late March to late April. Upon arrival on the breeding grounds, the birds start building nests. Each clutch is usually composed of two eggs, but only one chick normally fledges successfully. Incubation takes 30-35 days and the young begin sustained flights by mid-August. Birds depart for the wintering grounds in mid-September. Whooping Cranes reach maturity at four years of age and breed annually thereafter. Their lifespan is 22-30 years. During the breeding season their diet includes insects, crustaceans, minnows, frogs, snakes, small rodents, seeds and berries. During migration, they feed on waste grains, insects and small rodents. Blue Crabs and clams are the most important food source on the wintering grounds, but they consume Wolfberry and acorns on adjacent uplands.

Habitat quality, and subsequently, food resources, are the important factors controling the species’ numbers. The breeding range in Wood Buffalo National Park is very restricted. However, Whooping Cranes appear to be more limited by risks faced during migration and factors affecting their wintering grounds than those affecting their breeding grounds. The concentration of the species in the vicinity of Aransas National Wildlife Refuge, makes it susceptible to catastrophic events (e.g. hurricanes, chemical spills). This critical wintering habitat is particularly at risk because it is subject to heavy boat traffic involved in the transport of petrochemicals, resulting in habitat degradation, contamination and increased possibility of accidental spills.

To know if this species is protected by provincial or territorial laws, consult the provinces' and territories' websites.

Summary of Progress to Date The recovery of the Whooping Crane is a cooperative effort between Canada and the United States. The naturally occurring population in Wood Buffalo National Park (WBNP) continues to prosper. In 2004, a record 66 chicks hatched from 54 nests, including 20 sets of twins. From these, a record 40 chicks fledged in mid-August, including 5 sets of twins. The excellent production resulted in the WBNP population numbering a record 216 individuals, a population size that they have not been at in over 100 years. As well, several reintroduced flocks of Whooping Cranes exist. A non-migratory wild flock was established in 1993 in Florida, and the eastern migratory flock was formed in 2001 and migrates between Wisconsin and Florida. No individuals remain from the first flock established in 1975 in south-eastern Idaho, wintering in the middle Rio Grande Valley of New Mexico. Summary of Research/Monitoring Activities The Whooping Crane is one of the most well studied species at risk in Canada. Breeding ground surveys in the northern part of WBNP have been conducted annually since 1964. These surveys have been used to gather important ecological information such as the number of breeding pairs, and hatching and fledging success. The cranes? migration route to their wintering grounds in and around the Aransas National Wildlife Refuge in Texas has also been monitored since 1975 in order to identify the flight path and locate important staging areas. The health of wild and captive flocks is monitored for West Nile Virus, Eastern Equine Encephalitis, and Infectious Bursal Disease Virus. Research efforts have been quite varied for the Whooping Crane. From 1996-1999, researchers at WBNP investigated Whooping Crane diet and causes of chick mortality. This project identified food resources available to the cranes on their breeding territories and used radio transmitters and observations to determine the age and cause of death for chicks lost during the breeding season. Other research involves identifying and describing crane breeding habitat, mapping it in a Geographical Information System (GIS), and comparing the extent and suitability of this habitat to similar but currently unoccupied habitat. This mapping, in conjunction with ongoing population viability analysis, is being used to identify critical habitat for the Whooping Crane in Canada. Summary of Recovery Activities Captive breeding and reintroduction has played an important role in the recovery of the Whooping Crane. A captive breeding centre has been in operation at the Calgary Zoo since 1993, and in its first 11 years of operation it produced 20 offspring for release into the wild and for the maintenance of the captive breeding flock. Two additional captive breeding facilities, the International Crane Foundation and the Patuxent Wildlife Research Centre, are located in Wisconsin and Maryland respectively. The Northern Life Museum in Fort Smith, Northwest Territories opened a new exhibit prominently displaying the Whooping Crane named CANUS. CANUS was the name given to the most prolific Whooping Crane ever. CANUS and his offspring have sired approximately 186 chicks in his 38-years in captivity at the Patuxent Wildlife Research Center. Other recovery activities include an ongoing public awareness program in Saskatchewan. URLs http://www.mb.ec.gc.ca/nature/endspecies/whooping/db01s03.en.htmlhttp://www.bringbackthecranes.org/crane-info/recv2004a.htmhttp://www.operationmigration.org/http://endangered.fws.gov/canada/crane.htmhttp://www.whoopingcrane.com

Report a problem or mistake on this page

Government of Canada activities and initiatives